Most major global equity markets ended the month with either modest gains or in negative territory, as concerns around the rapid spread of the Covid-19 Delta variant spooked investors. That said, the vaccination drive in developed markets across Europe (particularly in the UK) and the US continued, with between 50-60% of the population in these regions at least partially vaccinated.

The US Federal Reserve (Fed) met during the month and kept interest rates unchanged, however, its 2021 calendar year inflation forecast moved slightly higher. What surprised some market participants was the slightly more hawkish tone from the Fed, as they signalled that there could be two interest rate hikes in 2023, with the first hike expected in Q3 2023 (slightly earlier than the original early 2024 estimate).

The Fed’s preferred measure of inflation, core personal consumption expenditure (PCE) moved higher to a year-on-year figure of 3.4% in May (the highest increase in prices since 1992) from 3.1% in April. The Fed has continued with its rhetoric that these price pressures are driven by supply bottlenecks and the reopening of the economy and are, therefore, transitory.

South African equities ended the month lower for the first time in eight months (since October 2020), as disappointing performance from resource counters (gold counters in particular) weighed on the performance of the local equity index.

Local bonds ended the month higher, despite foreign selling (foreigners sold R14.2 billion of SA bonds in June) and a weaker rand acting as a headwind to the performance of the asset class.

Local listed property delivered strong performance for the month, despite giving up some gains towards the end of June on the back of concerns around further Covid related restrictions.

The rand reversed some of its recent impressive run, ending the month weaker against most major currencies as hawkish comments from the Fed proved supportive of the performance of the US dollar.

South African President Cyril Ramaphosa announced that the country will move to an amended level 4 lockdown (effective from the 28th of June) which includes restrictions on alcohol sales, prohibiting indoor and outdoor gatherings and an extension of the overnight curfew. The harder lockdown measures come on the back of a surge in Covid-19 infections across the country as a result of the highly contagious Delta variant.

SA headline CPI moved significantly higher to a year-on-year figure of 5.2% for May (from 4.4% in April), as the base effects of higher fuel and food prices filtered through to the inflation print.

SA’s trade balance came in at a surplus for May (R55 billion), following a revised surplus for April of R51 billion, as exports increased 1.5% month on month and imports retreated slightly.

Chart of the month: There continues to be a significant disparity between the speed of the vaccine rollout in advanced economies versus those in emerging economies (particularly those in sub Saharan Africa). 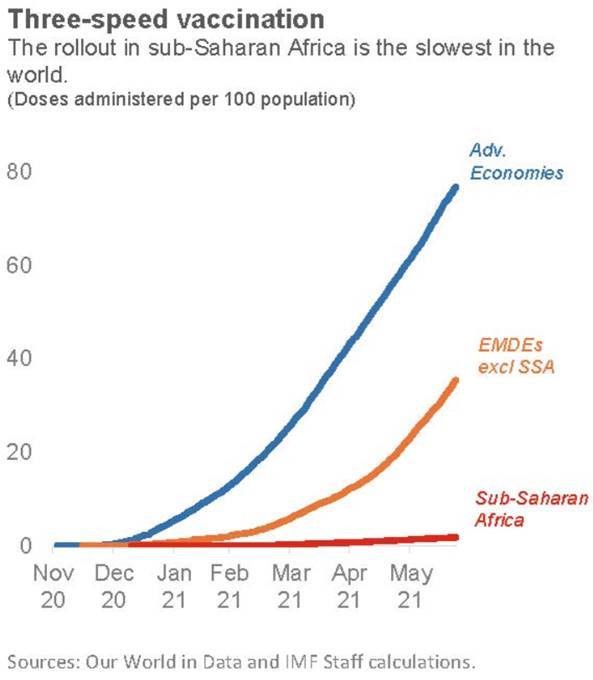 See below for a summary of the key market movements for the month of June:

What is Sasria? Everything you need to know

Have we been here before? By Morningstar Investment Management South Africa