For months analysts and market commentators have warned that the local market is overvalued and that a correction may be on the cards. Since its peak the JSE All Share (ALSI) has pulled back by roughly 10% as can be seen below.  This view was reflected by most portfolio managers which were relatively conservatively positioned across portfolios. 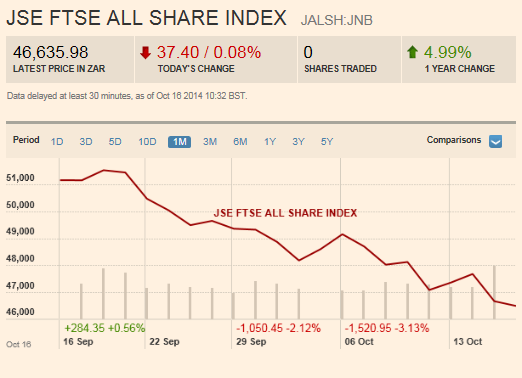 What caused the recent sell-off in markets?

The South African market usually tracks the world leader, the US. If the US market corrects, the JSE tends to follow. The recent correction has been sparked by a severe correction in mining shares caused partly by a sharp dollar rally.  The US dollar rallying has contributed in a big way to push down the prices of a range of commodities including oil, iron ore, copper, platinum, gold and palladium.  The situation has been aggravated by reports of weaker economic growth in China and Europe and commodity prices have taken a beating.

The poor economic data coming out of Germany and the possibility that Europe could go back into recession have added to the market’s woes.  The big question now is whether the European Central Bank has enough firing power to resolve such a situation, especially given that Germany is slowing down as well.

We believe that in times like these, investors should stick to their investment strategy and not make emotional decisions that will influence the outcome of their investments.

This belief is further entrenched by the fact the FPM Model Portfolios continue to protect investors relative to the large equity market correction. We have included the drawdown’s over the last month to illustrate this point.

Longer-term numbers continue to look good on an absolute basis as well as relative to benchmark as detailed below:

We hope this information provides you with the comfort that your investment assets are being managed with all the care and due diligence they deserve. If you would like additional information or to chat to one of us please do not hesitate to give us a call on 011 778 9300.

What is a risk profile?

Review your budget and bump up your savings where possible

Stay focused on the long term during market turmoil